The story we are writing ... 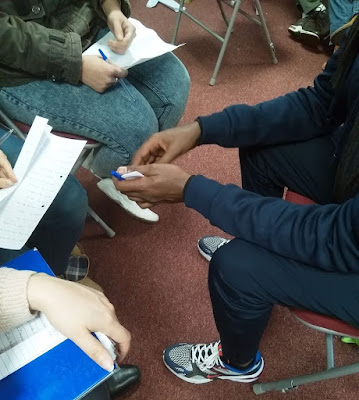 This feels like a long overdue update on a website that has been sadly neglected! The lack of news is certainly not because nothing has been happening: quite the contrary, we have been excited by how quickly this fledgling project seems to be taking flight.

Now, at the midpoint of the academic year, it feels like a good point to reflect on where things are at so far.

Since we began meeting regularly as a group at the beginning of October, 30 different participants have engaged with the project. Some have come and gone, but many, even most, have become part of building a truly beautiful, supportive community which cradles both laughter and tears. Amongst those thirty we have welcomed people from eighteen different nationalities, women and men of different ages, cultures, religions, languages ...

We have also begun the other part of our project: creating opportunities for the project participants to share their stories with children and young people in schools, and here too it already feels like the work is bearing fruit. A rough calculation suggests we have spoken to almost 300 school students, plus their staff, since we got started.

The numbers, of course, can only ever tell a tiny part of this story: a story woven together from the strands of so many different stories being held and shared in these spaces.

Really it is a story told through the attentive gestures of one participant to another, noticing and caring about a shift in mood or energy, or offering a cup of tea with the right number of sugars; it is told through the music of a song, shared with others for the first time; through the snippet of a memory, offered in faith and tenderly held.

And it is also a story told through a young person's anger at injustice; through a shift in mood and attentiveness as a group strains to hear and really understand a stuttered story; through a teenager daring to express emotion in front of their peers.

It is a story which is rarely simple, or straightforward, or coherent and complete. It is a story made up of throw-away comments holding deep truths and of tattered scraps of paper on which we write something which reveals the depths of our identity. It is a story of which there is much more still to be written. It is a story stitched together from something of each of us, and it is truly, truly, precious.