Together again. And then not. 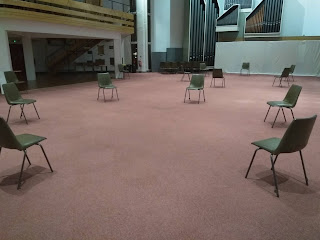 As ever, there has been a long gap between posts. As ever, a fair amount has happened in the interim.

There were so many good things through the summer: lots of walks in the various parks and green spaces of Birmingham. The odd game of football, plenty of laughter, and some serious conversations in the mix too. We even making it to Blackpool for a somewhat blustery but undoubtedly very beautiful day. We shared some wonderful moments which we carry into the autumn.

Much as we enjoyed our various trips and excursions, and much as our sessions on zoom continued to generate ideas and inspiration, we were also still looking forward to being able to sit down in a room together: if not exactly as we used to, then at least something close to it. As the autumn approached bringing its more unpredictable weather, we were even more keen to be able to gather once more in indoor space.

Finally, after reading and rereading the ever-changing guidance, after lots of conversations and negotiations, after trying to figure out of how best to keep one another safe, early in October we returned to our home venue for the first time since March.

It was not the same, but it was very, very good to be back.

And there were glimmers that we were once more doing what we do: having conversations, sharing experiences, writing snippets which might one day turn into something more, reflecting on life and simply being there with and for one another. 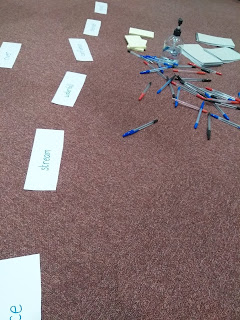 Friday 30th October was our third meeting, at which we found ourselves discussing the possibility that "tier three" restrictions, expected imminently in Birmingham, might limit our ability to continue meeting. In expressing their hopes that we could, one participant said of the sessions:

"it is one day in the week to feel alive"

24 hours later a second lockdown was being announced.

It was obvious that beyond the headlines there would be much wrangling over what exactly would and wouldn't be allowed. Could we still meet? Should we? We could, perhaps, have worked out a way to legally justify continuing. But despite the temptation to do so, we knew that wasn't really the point. For ourselves, for each other and for our wider communities we made the difficult decision to agree to stay at home.

And so we will face down our zoom fatigue. We will continue to meet together in virtual space. We will, perhaps, arrange for some one-ot-one walks in the rain. We will keep in touch and hold on to the hope that better times lie ahead. We will still be here for each other.